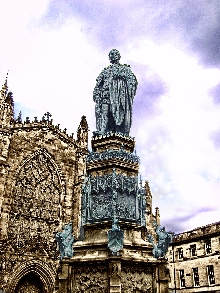 The opening scene of The Monuments Men gave me chills. It opens with the priests at the Saint Bavo Cathedral frantically packing up the panels of the Ghent Altar Piece and driving them away just ahead of the advancing Nazis. This scene also made me wonder how many people are able to identify this work. Not being aware of its importance in Western culture pretty much takes away any chilling effect. My elitism aside, the film mostly goes downhill from here.

Like The Internship, I took the risk of watching this film because of my interest in the background material. I enjoy history (I’m a sucker for WWII flicks) and I have more than a passing interest in art. The story begins with Frank Stokes (George Clooney) pitching FDR on a plan to put together a platoon of art types to go to the European Front in an attempt to rescue the great art that Hitler has methodically stolen and stashed away. A reluctant and skeptical FDR relents when Stokes makes the appeal that the only way you can completely destroy a people is to destroy their history and their achievements. This becomes one of the main themes of the film and is also intended to serve as the main vehicle of suspense.

Since all of the young artists and academics are currently off fighting in the war, Stokes has no choice but to round up a motley band of middle-aged recruits—academics, curators, and artists. This is one of those films with an all-star cast that pretty much goes to waste. You’ve got Clooney in the lead for heaven’s sake. There’s also Matt Damon, Bill Murray, John Goodman, and Cate Blanchett. Blanchett probably has the best line in the movie. A running joke around Damon’s character is that one of his qualifications for the assignment is that he claims to speak French. However, the French tell him, less than politely, to speak English.

Blanchett’s character is a curator at The Louvre and after the liberation of Paris is thrown in jail, charged with being a collaborator. Damon manages to get her free on the condition that she assists with locating the treasures stolen from The Louvre. She is reluctant to offer her assistance. I mean c’mon? She didn’t put up a struggle with the Nazis, but she’s resisting the Americans? During a moment of frustration with her obstinacy, Damon informs her that if it weren’t for the Americans she would be speaking German. She retorts that at least she would still be speaking French! Good one.

If you’re looking for a blood and guts WWII movie along the lines of The Longest Day, The Big Red One, or Saving Private Ryan then you’re going to be sorely disappointed. Stokes’ platoon always seems to come upon the major battle grounds of the war long after the initial skirmishes. They arrive on the European continent after the beaches of Normandy are firmly under allied control. They do manage to catch up with the vanguard to be at the Battle of Bulge in time for Christmas. Two of the loveable members of the platoon do meet their demise. It is war after all and sacrifices have to be made.

Casting Murray and Goodman along with Bob Balaban as the comedic foil for Murray’s ribbing was bound to give The Moments Men a Hogan’s Heroes feel. And the actors used to portray historical figures such as FDR, Hitler, Goering, and Truman are all caricatures from central casting. Hitler looks like Charlie Chaplin playing him in The Great Dictator. The zany background music further contributes to the wackiness. Not sure if this was an intended effect, but I found it cringe-worthy.

I do give the production high marks for the quality of the art reproductions. They’re very convincing and seeing them all stacked up in abandoned mineral mines really hammers home the enormity of Hitler’s greed and the depths of his insanity. We also see the “deviant” art by artists such as Picasso set a blaze by SS troops with flame throwers during the final days of the Reich.

The climax is the rescue of the panels of the Ghent Altar Piece (yes, it did fall into Nazi hands) with the dreaded Soviets closing in with their own evil designs on the masterpieces. Again, more stereotypes here with the Russians portrayed as brutish and uncultured.

The Monuments Men does raise some important issues including the enormity of Hitler’s greed. Apparently, over five million works of not only art, but also vast quantities of gold bullion and even everyday items such as place settings and knickknacks were also uncovered in the Nazi stash. To see row after row of the bounty piled up is startling. The ultimate question is asked of Stokes during a debriefing session stateside by a Harry Truman caricature: was the mission to rescue the great art worth it? The answer, of course, is obvious. Despite portraying a little-known, but important event from WWII and raising some important issues, The Monuments Men, on final assessment, is a masterpiece in boredom.